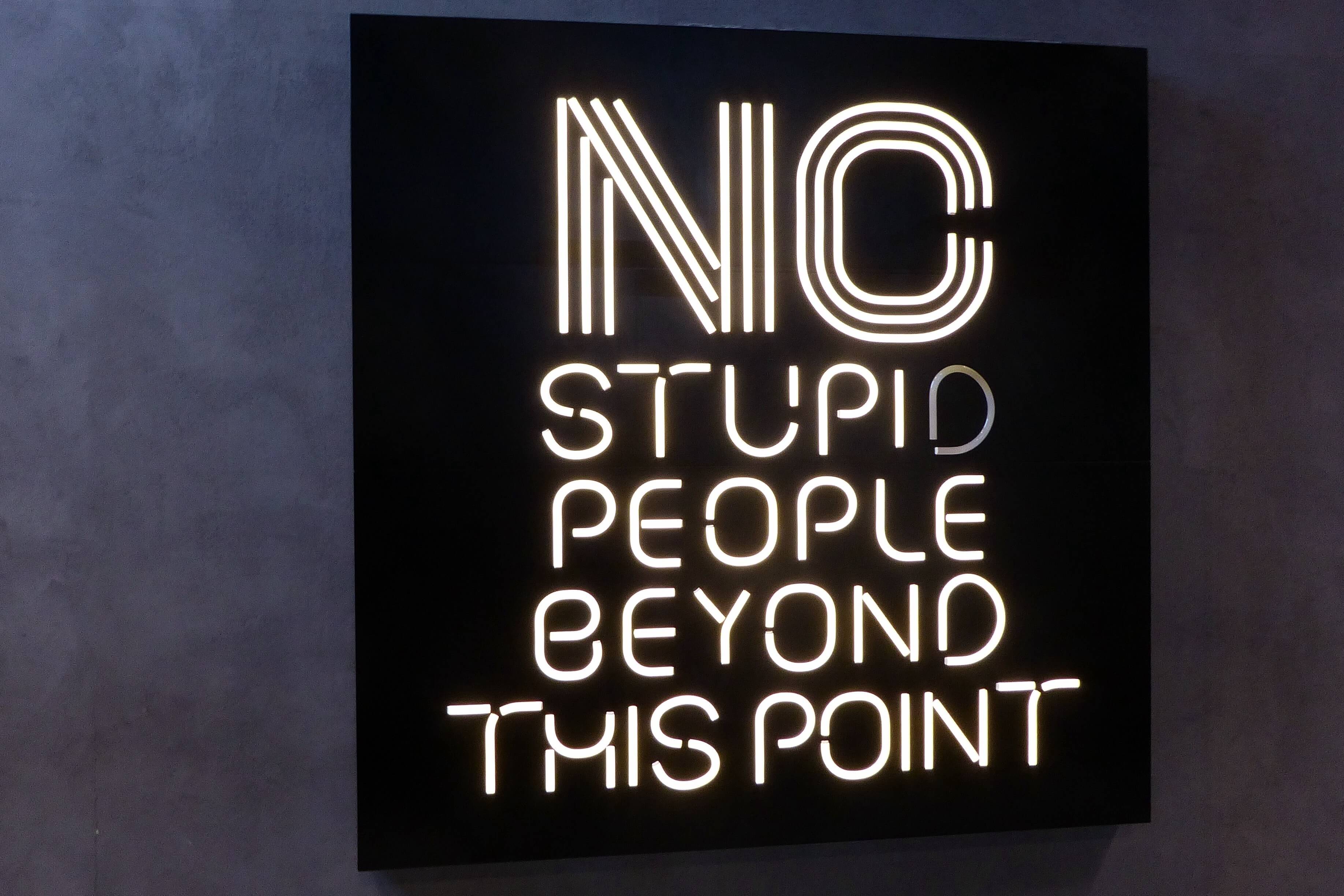 Published by Sheri Byrne-Haber on October 17, 2019

Yes, all of these have actually happened to me personally

What is a microaggression?

A microaggression is an indirect, subtle, possibly unintentional discrimination against members of a marginalized group. Usually these take the form of statements, actions, incidents, or exclusions. Being excluded from an event because of what the host perceives you can or can’t do is almost always a microaggression.

After 50+ years of dealing with this, I can tell you that microaggressions are mentally very wearing. And especially for people with disabilities, they don’t seem to be slowing down or even becoming unacceptable.

Ableism is to disabilities what racism is to people of color. Ableism is, in short, the expression of a discriminatory preference for someone without a disability. Ableism assigns inferior worth to people who have developmental, emotional, physical or psychiatric disabilities by devaluing and limiting their potential. Ableism includes things like belittling the need for mobility devices, accessible parking cards, assistive technology or interpreters, the need to take medication, doctor’s appointments, or any other headaches that people with disabilities have to deal with to be equal that people without disabilities typically don’t have a clue about.

You are using that wheelchair for sympathy, I’ve seen you walk

This one should be paired with its close cousin “you are taking that parking space from someone who really needs it”. Yes, I can walk. And every step I take risks (at worst) breaking one or more bones in my foot and at best causes some pretty significant pain. The last time I seriously broke a bone in my foot (the 4th time in the same location), though it didn’t require surgery, I was in a cast for 7 months, and 4 of those months I couldn’t put any weight on it at all. I don’t even bother going for Xrays in stress fractures any more. This microaggression is SO common that it has it’s own hashtag: #AmbulatoryWheelchairUsersExist.

When most non-disabled (and some disabled) people think of wheelchairs, they usually think of someone who uses a wheelchair due to paralysis. But as the US has gotten more accessible, wheelchairs have become a more viable option for people who can walk, but shouldn’t walk for various different reasons including

Can I pray for you?

This is one of those great microaggressions that seems to come from a place of caring. But let’s unpack it:

This request is all about making the requester feel like they’ve done their bit required by THEIR religion (not mine) for the less fortunate. Hard pass. But I’m thinking about becoming a Pastafarian, accepting the next prayer offer, and then starting the prayer “Oh great flying spaghetti monster…”

Have you tried X?

At least once a month, some well meaning person will forward me an article about some unproven medicine/treatment/diet (sometimes even on the wrong condition — I frequently get links forwarded on the latest Type 2 diabetes treatment, and I am Type 1) and ask me if I have tried it.

I hate this microaggression SO much that I am frequently reluctant to mention new treatments or therapies that I hear about to other people with disabilities that I have close friendships with. Once, I had a draft email sit in my outbox for two weeks before I forwarded a new treatment for blindness to a friend of mine. I only did so after reaching out to him saying “are you interested in this?” Like “Can I pray for you?” this microaggression is also about making the requester feel like they’ve done their bit for the less fortunate. So another hard pass, unless you have permission.

I’ve been asked if I miss skiing or running marathons. I recently had a woman sitting in the same group as I at a diversity class introduce herself by talking about how much she missed running because she’d had a recent knee injury and had to stop training. She then continued by saying she couldn’t imagine not being able to run at all (looking at me as she said this). Honestly, a diversity class was the last place I expected ableist comments or disability microaggressions to occur.

This is where congenital disabilities and acquired disabilities deviate. With most congenital disabilities, we never had the ability to begin with, so it’s not possible to miss it. It’s like asking someone who was born blind if they miss seeing rainbows, or someone who was born profoundly deaf if they hear voices in their dreams. Acquired disabilities are psychologically very different. They involve abilities that were possessed, then lost. For example, I used to be a concert flautist. I lost the ability to play the flute in my 40s because the arthritis in my hands got too severe to play. A person with an acquired disability frequently has to go through the Kubler-Ross grief cycle (denial, anger, bargaining, depression and acceptance) before they can move on. And yes, I do miss playing the flute but have made up for it in other ways such as listening to others play, participating in my daughter’s band and orchestra activities, and occasionally teaching flute lessons.

When this type of comment comes from a child, it is out of a place of pure curiosity so I always answer, and do so honestly — no sugar coating ! Adults without disabilities should know better.

Are you going to wear those shoes every day?

To which my answer was “uh, yes, because I spent $1300 customizing these shoes to fit my leg braces?” I tried to think of a snappy Carrie Bradshaw-related comeback involving lack of closet space, but my brain was so frozen by this totally embarrassing (at a board meeting by the head of HR no less) off-hand comment by a person with authority over me that the humorous comebacks usually at my disposal completely escaped me.

Any other comment belittling a habit or need of a person with a disability caused by their disability falls into this category. “Are you going to need an interpreter / service animal / assistant/ magnifier all the time” are common variations to this ableist disability microaggression. The real answer isn’t yes or no. The real answer is two-fold 1) why do you care? and 2) IT DOESN’T MATTER. If whatever it is being inquired about helps the individual overcome their disability even partially, then they get to keep it. Full stop. If the inquirer is concerned because they need to plan for logistics for that accommodation, then say so with the question . Then it is clear where the concern lies — about making the situation work best for the accommodation, not subtly implying that the accommodation isn’t legitimate, or is an inconvenience.

If I had a nickel for every time I either heard this or saw actions that were based on this microaggression, I would have retired a long time ago.

Diversity is about, well, being diverse. And like the first microaggression listed in this article, it comes with its own hashtag — #Diversish. What is more diverse than six different types of disabilities (hearing, vision, neurological, motor, and cognitive, plus chronic health conditions not related to the first five) that can be:

Disabilities are just an accident or twist of genetic fate that people rarely have control over. If people with disabilities were a minority group, we would be the largest minority group in the US. Enough said. Just because people with disabilities don’t look alike, don’t always have the same symptoms (even when we have the exact same medical condition) and can’t be easily categorized doesn’t make us any less marginalized than any other “traditional” diversity group such as gender, ethnicity, or veterans or LGBTQ+ status.

I couldn’t do that

As a Type 1 diabetic, I frequently hear from people about how they couldn’t give themselves injections. My new standard answer is “when the alternative is dying, you get comfortable with injections pretty quickly”. The fact that I *have* a standard answer and it has evolved over the years is a sign of how frequently I hear this microaggression.

Ableist / Disability microaggressions are most often a form of unconscious bias. The first step in dealing with unconscious bias is to become conscious of the bias. How does one generally become conscious of a bias? Training. But a recent HBR article says that training is not working for unconscious gender-based bias. So why would there be any reasonable expectations that it would work for disability bias? Reverse mentoring (pairing non-disabled executives with employees with disabilities) might be the answer, but that requires a whole lot more people with disabilities than most companies employ. I don’t have a good answer, but if I can raise just a handful of people’s awareness with this article I will be happy with the result.