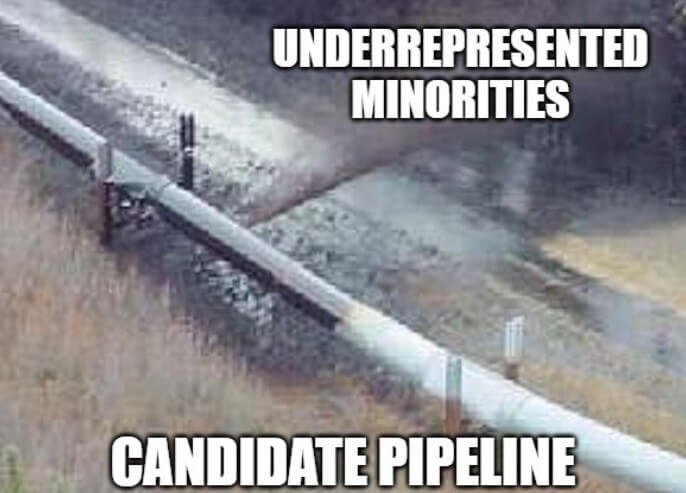 Published by Sheri Byrne-Haber on October 16, 2020

At the end of September, the CEO of Wells Fargo publicly stated the following:

“[T]he unfortunate reality,” he wrote, echoing comments he had made on a video call with employees, “is that there is a very limited pool of Black talent to recruit from.”

As should have been easily predicted, the backlash was both swift and brutal. It was then disclosed that seven high-ranking black women had quit Wells Fargo in the past year, citing gender and race issues in their decisions to leave.

The “pipeline” trope is the first (and sometimes last) stop for organizations that don’t care to look deeper at what the problem really is.

Because, of course, organizations generally do not want to admit publicly that they are part of the problem.

I don’t know anyone who HASN’T heard the “pipeline excuse” for lack of recruiting underrepresented minorities (URMs) of all categories, including people with disabilities. Note that I use a broader definition of URMs than the federal government, which limits the definition of URM to gender and ethnicity.

To me, a URM is someone who:

Full stop. That includes status as a veteran, LGBTQ2+, caregiver, or person with a disability, as WELL as gender and ethnicity, to name a few of the potential categories.

Defining the lack of underrepresented minorities in terms of a “pipeline problem” implies that the fault lies elsewhere, and the organization can’t do anything to solve it.

Blaming someone else for the problem gives organizations permission to claim they are “doing the best they can under a bad set of circumstances.”

We don’t have an underrepresented minority pipeline problem. We do have:

Mythbusting time: Organizations CAN do something about the “pipeline problem” that they claim they have, but first, the problem needs to be reframed and the organization needs to take responsibility for the aspects of the problem within their control and their lack of action in those areas.

Start with a “Five Whys” analysis

By performing a root cause analysis on your pipeline problem, you are flipping the narrative.

First why: Ask WHY you can’t get underrepresented minorities in your pipelines. The most common explanation is a lack of applicants.

Second why: Ask WHY you aren’t getting applicants?

Third why: Why isn’t your organization looking in the right places?

Why are URM applicants being excluded in your applicant tracking system?

Why aren’t you taking care of your current URM employees?

And keep asking more “whys” until you have a list of actionable steps assigned to accountable parties that can be taken to help solve the issues that are PERCEIVED by the organization to be a “pipeline problem”.

Here are steps that any organization can take to improve their representation of URMs even if they haven’t done a five whys analysis.

5. Did your organization take care of the URM employees that you have?

6. Is your leadership all-white (or part-white/part-Asian in tech) and largely male?

7. Does your leadership’s action match the organization’s verbal claims?

8. Is your leadership is “doing diversity” or treating diversity and inclusion like an extracurricular activity?

9. Does your organization have a relationship with non Tier 1 universities and bootcamps?

10. Does your organization endow scholarships for underrepresented minorities?

11. Does your organization offer paid internships with a living wage?

12. Does the DEI (Disability, Equality, and Inclusion) part of your organization work take input from ERGs (Employee Resource Groups) and effect change to benefit URMs? Or does DEI expect the ERGs to drive change in a volunteer capacity with little to no power or spending authority?

13. Does your organization require interviewing a qualified URM candidate before making an offer to a non-diverse candidate? Emphasis on qualified, bringing someone in for an interview just so you can check that box when they are clearly not qualified to receive an offer, does NOT count.

14. Does your organization support your employees volunteering in educational settings?

Repeat after me — the pipeline problem is a myth.

Until organizations recognize that:

numbers of employees that are URMs will continue to stagnate or even drop.

Don’t be a performative ally.

Do what needs to be done.