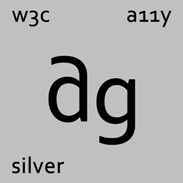 Published by Sheri Byrne-Haber on January 21, 2021

The first peek at the long-awaited World Wide Web Consortium (W3C) major update to the Web Content Accessibility Guidelines is here. In W3C speak, we call a First Published Working Draft (or FPWD). Silver (aka WCAG 3.0) has been in the works for more than four years. The W3C Silver Task Force has a broad cross-section of accessibility experts from government, education, for-profit, non-profit, and accessibility consulting organizations.

This article is intended to be a 50,000-foot overview of Silver. For a more in-depth review from someone who has been involved since Silver’s beginning, I would suggest reading Jeanne Spellman’s outstanding detailed introduction or reading the W3C documents that were released today.

A few essential over-arching data points to begin with before diving into the WCAG 3.0 details:

Things that have changed in W3Cs approach with to WCAG

There are several areas in Silver that are new approaches by W3C concerning accessibility.

Previous versions of WCAG viewed accessibility as all or nothing; you were either accessible, or you weren’t. WCAG 3.0 is more of a spectrum of gray.

Under earlier versions of WCAG, if you had 1000 pieces of alt-text and had 999 of them correct, it could not be legitimately claimed that the product fully supported the alt-text guideline because of the one failure. “Supports with exceptions” would be the best that could be accomplished under these circumstances. The scoring mechanism allows accessibility to be viewed through the lens of having a particular type of disability (or disabilities) and how accessible that software would be to people in your disability group(s).

Under WCAG 3.0, products will be scored.

Scoring is currently proposed as broader categories of how well a product is doing for each outcome. Individual atomic scores will ultimately roll up into an overall product score and functional need score. See the next section for more details on these definitions.

The WCAG 3.0 scoring mechanism includes the potential to receive “medals.”

A product can be conformant or receive Bronze, Silver, and Gold medals based on its scoring. Currently, for example, it is proposed that to receive a bronze medal, a product must have:

If the Silver Task Force chooses to use percentages rather than 0–4 scoring, this 3.5 score will map to approximately 90 % to receive a Bronze medal.

There are no longer atomic guidelines like “2.4.6 Headings and Labels.”

This approach in earlier versions of WCAG created issues where upwards of 10–12 guidelines across multiple pillars were implicated for more complicated user interface components, creating much confusion amongst people trying to apply them.

Silver’s approach in place of atomic guidelines are guidelines that are focused on a particular topic rather than a single requirement. All guidelines for the subject are grouped in “outcomes.” One of the guidelines I worked on is called “Structured Content.” There are five such sample guidelines included in the FPWD. As you might suspect, that guideline contains every requirement related to structured content in one group. Each of these guidelines has the following components:

In addition to methods and outcomes, there is “holistic testing.”

These are different types of tests above and beyond atomic testing and potentially include usability testing or expert third-party reviews with users with disabilities. Holistic testing is currently proposed as one of the things necessary to achieve a medal.

W3C is a collaborative organization. They want feedback, and the reason WCAG 3.0 was released was to start obtaining that feedback. I strongly urge everyone invested in accessibility to review the full FPWD and consider ways to provide feedback — features you like, features you don’t like, proposed alternatives, and perceived gaps.

W3C uses GitHub, so all comments can be publicly viewed (though they can be submitted anonymously). To submit feedback, file an issue in the W3C silver GitHub repository. Please file one issue per comment, don’t give us 16 issues in a single comment. You may also send comments via email to public-agwg-comments@w3.org. The Working Group requests comments on this draft be sent by 26 February 2021.