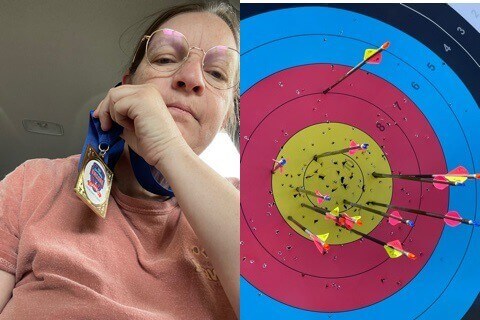 What it’s like to be a liberal, female, disabled archery competitor

Published by Sheri Byrne-Haber on October 26, 2021

23 months ago, we had a group of teammates visiting from Austin and the Pacific Northwest. We wanted to do a group bonding event, only there were some spending restrictions in place and the event couldn’t involve food. Given my experience with a previous event that was not fully wheelchair accessible, I demanded that this event include wheelchair considerations.

“Can you do archery?” asked the event coordinator, after I torpedoed the “escape room” idea.

At the event, I quickly realized I had forgotten how much I had loved archery as a child.

Archery has all of the goal-oriented nature combined with completely objective measurements that I love in my life. I’ve discovered it also substitutes for mindfulness exercise at times, something that I had never previously successfully managed to accomplish.

I ordered myself a beginner’s compound bow in December 2019. I don’t have great upper body strength due to a bad spinal curvature and a lot of recurve bows are too long for wheelchair use. I went to a local indoor range a few times, didn’t do particularly well, and arranged to start taking lessons from someone who had the level of coaching certification that required kinesiology knowledge. And then the pandemic hit.

From March 2019 to July of 2020, I left my house for very little other than groceries and medical appointments I couldn’t do over the phone. All my conversations were 6 feet away from anyone I didn’t live with — my parents, my two adult children who didn’t live with me anymore, and my neighbors, with the exception of the one I was forced to get a restraining order against because he didn’t believe in COVID and thought it was fun to breathe on me. With multiple immune-compromising conditions separate from what put me in the wheelchair, I just wasn’t taking any chances.

Because I live at the top of one of the mountains that makes Silicon Valley a valley, I had enough space to shoot safely at home. I started at 10 yards, then went to 15, then 20. For the first year, my coach and I didn’t even know what each other looked like because we both stayed masked all of the time. In July 2020, I couldn’t extend the distance my first range any more. I had also maxed out my first bow’s draw weight. So I bought an intermediate bow and we set up on the other side of our property — 25, then 30, finally hitting 40 meters. I shot 6 days every week, Wednesday being my day off, but I only ever shot against myself. The amount of weight it took me to draw back my bow slowly increased half a pound every 2 weeks from 20 lbs now up to almost 43 lbs. Higher draw weight means faster arrow speeds and then it’s less likely for things to go wrong in flight. My scores went from super crummy where I got really excited if I even was close to the target to being quite annoyed with myself if more than half of my arrows are outside the gold.

I’ve also recently had to cut down from shooting 12 arrows to 6 at long distances and to 3 at short distances because I kept breaking arrows when they “Robin Hooded” and hit each other, which gets pretty expensive fairly quickly. More importantly, supply chain problems are killing archery equipment delivery times right now. The estimated arrival for my next set of arrows is six months away.

In February 2021 I splurged and bought a PSE Carbon Air Stealth 35 EC bow. The price tag made me pause since it was the most I had ever spent on a sport, ever, for myself. I started going to the gym twice a week for additional core strengthening workouts to improve my stability in the chair while shooting. FYI, I don’t have a sponsor. If you like this article please let the good folks at PSE Archery and Easton and Club Fit know that I’m available for adoption 🙂

After I had been fully vaccinated, competitions started cropping up again and so I thought “Why not? It’s time to get a few competions under my belt to see if this Paris 2024 Paralympic dream of mine is realistic.”

My father describes my political leanings as, “dead dog in the road Democrat” — meaning if I had to choose between voting Republican or voting for a dead dog in the road, I would likely vote for the dead dog in the road. He claims that’s from my first college being UC Berkeley. He is probably not wrong. Bottom line is that the issues that are important to the Democratic party are important to me — It’s hard to go without healthcare when you are disabled or be forced into career decisions you don’t want to make because of health insurance. I’ve done that, multiple times, and I wouldn’t wish it on anyone, even the conservative archers that I sometimes compete against.

I never think of archery as a “hunting” sport because I don’t hunt — hard to do from a wheelchair, no matter how accurate you are. I only shoot at targets. But the people who love the 2nd amendment right to bear arms, also love to hunt and also love archery tournaments. No big deal, you can go an entire tournament without inquiring as to other’s political beliefs. It’s all the other baggage that goes with being a conservative these days that make it a significantly more complicated and unpleasant issue than that.

Even when mask mandates were the law and most Californians followed them, I would go to stores where the customers, and sometimes the employees, pretended they didn’t exist. I would go check-in and then ask the staff to text me and I waited in my car until it was my turn. People don’t wear masks at ranges or at competitions and don’t keep them nearby either. I’ve been told many times by fellow archers, “you know you don’t have to wear that, right?”

When you do see a female archer, about 1/3 of the time archery is a family sport. Very few adult women do archery independently, much less older women. Because the sport of archery also tends to skew older, that means you run into the occasional man that feels the need to comment on your legs (yes, even if you are in a wheelchair) or who absolutely will NOT take no for an answer when they perceive you need their clearly superior unsolicited help or advice. This doesn’t happen as much now that I am somewhat “known” at the local outdoor ranges, where I visit when I need to practice at distances more than 40 meters. The rangemasters have been fabulous about making the course more disability-inclusive, the other archers not so much. I take great pride in the fact that I generally outshoot the people I’ve had bad experiences with, who then inevitably turn to commenting on the weather or equipment that needs repair or some healed injury unexpectedly flaring up to explain why they can’t beat a fifty-something-year-old woman using a wheelchair who has been shooting for less than two years.

There are few people of color

Archery is the national sport of Korea and Bhutan. Bows are sometimes the first toys children in these countries get. But there are even fewer Black or Latinx shooters than women. I never gave that much thought until a large, black, male archer one day commented on how he needed to keep me around him at the range in case anyone took offense to him openly carrying a weapon. A joke that really wasn’t a joke. I was hoping he meant because I was a lawyer, but deep down I knew that wasn’t the case. I was sad that my privilege was showing in that I hadn’t given that issue a second thought. I am all-too conscious of it now. I am not the only individual that experiences the special condition of being the only one of their type at an archery range.

This one really ticks me off. I never assume what people can or can’t do until they show me. I love this quote from Ted Lasso, in the famous dart shooting scene from season one.

“Guys have underestimated me my entire life and for years I never understood why — it used to really bother me.

But then one day I was driving my little boy to school and I saw a quote by Walt Whitman, it was painted on the wall and it said, ‘Be curious, not judgmental.’ …

Because if they were curious they would have asked questions. Questions like, ‘Have you played a lot of darts, Ted?’

Then he completely sinks the a-hole he is shooting against. Unlike Ted (yes, I know he’s fictional), it still bothers me when people underestimate me. It means that they probably conduct their entire lives thinking people with disabilities are unequal, and behave correspondingly. I get a lot of that both in public and in the workplace.

This past weekend, I won the California State Seniors Archery Tournament for my shooting class and age group. Before the tournament began, I went to my assigned spot. A gentleman setting up next to me informed me authoritatively, “you aren’t supposed to be here.”

To which I replied, “Huh?” His statement confused me because I went where I had been instructed to go.

He doubled and then tripled down by saying:

The assumption was I was shooting in a para division. But I wasn’t. After I double-checked and was told, yes, I was in the right spot, he requested to be moved.

#Ableism and #Othering at its finest. But I’m going to nationals next March in Fort Lauderdale, and he isn’t.

Other forms of discrimination and bias

At the same tournament, I was treated to overhearing a conversation about how women’s archery is going to be flooded with guys who “go into the doctors office a man and come out a woman.” I’m ashamed I didn’t call them out on it then, but it was in the middle of the shoot. As was the same group’s subsequent comments about the forecasted rain colloquially referred to as a “Pineapple Express” because of the warm temperatures in the fact that the winds come from Hawaii as being “the most recent gift from the Asians.” Meteorologists stopped using that term because of the racist overtones, instead referring to them as atmospheric rivers. However old habits die hard.

So what am I going to do?

For starters, I’m not gonna give up archery or competing. I’m good at it, I love it, and people should occasionally see a person using a wheelchair beating an entirely non-disabled field.

I am, however, planning on filing a complaint with the tournaments organizers because there are supposed to be ethics that competitors are supposed to uphold and I certainly hope this type of behavior is not within the bounds of what they will allow.

A friend of mine told me it’s good that I am there, because maybe I can flip that **it around.

And that’s exactly what I’m going to do. Let the flipping commence. Paris 2024 or bust!